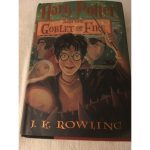 harry potter and the goblet of fire

Best selling used books engage readers. It compare to telling a story or simply getting someone to have a conversation with you. Naturally this may be more demanding than stated. However many writers succeed. Therefore we must explain or give some answers.Writing great books have no mathematical formulas.Yet some basic factors dictates.

Readers seek enjoyment and must understand the writing. They seek knowledge, excitement, fantasy thrill and more. If satisfied, each reader will share and the number of books sold will continue to grow. The books listed below are best sellers because they are great reads.

As stated earlier best sellers engage readers to the fullest. One such book Harry Potter And The Goblet Of Fire. In this series Harry’s training as a wizard has began. Harry goes out on dates and may fall in love. Not to mention the fact that he has become curious about mysterious events happening at the Hogart’s School of Magic. He also want to witness the magic competition between the schools. The life story of this fourteen year old  boy is magic. This best selling used book is available now at The Book Chateau.

Another thriller best selling used book is The Da Vinci Code. The fictional web woven around a certain piece of art baffles the mind. This stunning masterpiece holds the clue to a hidden gem. And even though it will take quite sometime to solve the mystery, it will be solved. This best seller used book is available now at The Book Chateau.

Lastly the third book on the best sellers  list is Angela’s Ashes a memoir. This is a story of children at risk and at the mercy of adults.The main character in the story a boy born in Brooklyn New York to Irish Immigrants. But raised in Limerick Ireland.The boys mother was not only the family’s bread winner but their value system since the dad spent his small income on liquor. However the boy loved his dad’s only contribution to the  family.The tale of Cuchulain who saved Ireland and The Angel of the Seven Steps who brought babies. This boy defied the odds and became very successful. This brilliant best selling used memoir is available now at The Book Chateau

Fifty Wall Street a well established brokerage house of Kimbridge & Company. Where three men fight for
partnership. They not only want power and money but the prestige it brings. With power and prestige comes women.

a prayer for owen meany

John Irving’s novel A Prayer For Owen Meany, about a dwarf boy with the wrecked voice. He is so small the other children picks him up and passes him hand to hand like a toy.

A Room Swept White a novel by Sophie Hannah. About miscarriage of justice.

a son of the circus

Son of The Circus a novel by John Irving about Dr. Farrokh Daruwalla a 59 year old Orthopedic Surgeon.Born in India .Now lives and practice in Canada,married to an Austrian. He is a man without a country. He will be forced to re visit India because of murders that happened decades ago.

a woman of substance

A Woman of Substance a novel by Barbara Taylor Bradford. About Emma Harte Lowther Ainsley. A seventy eight year old woman that is rich and powerful. She is self reliant and ruthless. Money is her weapon and adversity her tool.

Dan Brown author of The Da Vinci Code again produced a bestseller Angels and Demons . And yes its a brotherhood called”illuminati”.

Ann of Green Gables the Story of an orphan girl adopted by Matthew and Marilla Cuthbert. They own a farm on Prince Edward Island.

Back to Blood a novel by Tom Wolfe is a reflection of life,cultural diversity and racial division in the greater Miami Area. Cubans, Russians,French, Blacks and more. It’s a melting pot of people struggling to get power over each other.

Tim Ekaterin a young Investment Banker invests a huge sum of money in a thoroughbred racehorse, only to learn that the horse has a defect. He also learns that all that glitter is not gold, because this is a cut throat business. And in this case it leads to murder.

Black Notice a novel by Patrecia Cornwell about the arrival of a Cargo Ship at Richmond’s Deep Water Terrminal from Belgium . It is carrying a suspicious sealed container.